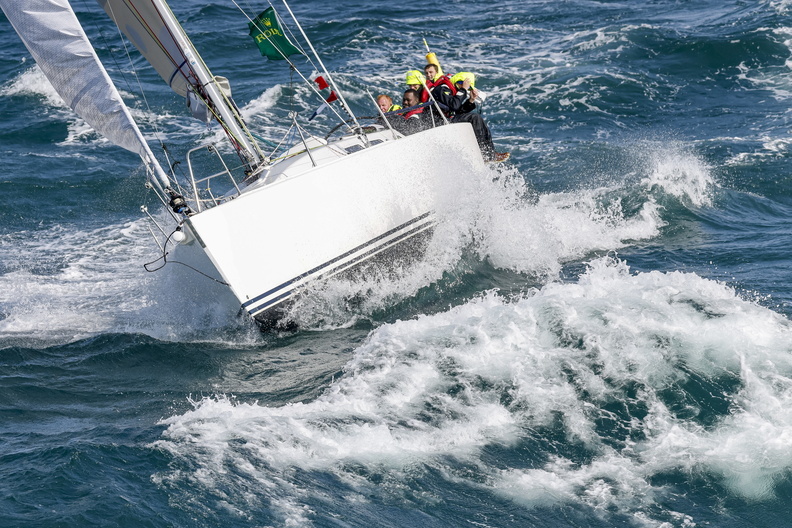 Introduction. After a very quiet year in 2020 when Covid-19 prevented any organised military sailing from taking place, the easing of restrictions at the start of the 2021 season saw people seize the opportunity to get back out on the water. A successful RORC racing campaign, culminating in the Fastnet Race, was a highlight of the year and Trojan competed in almost every UK based RORC race as well as in the Fastnet Race, finishing for the first time in Cherbourg. The RESTW took place in July, introducing more novice sailors to the sport; we had a strong performance in the Army Offshore Regatta and there was an excellent turnout at the Lymington meet. Both Right Royal and Trojan's maintenance requirements were slightly lower than in 2020 and both were successfully coded Trojan receiving a year-1 YDSA inspection from the surveyor. A number of Offshore committee members have changed over and the committee remains in good health; Lt Col Saskia Hart handed over to me as Rear Commodore (Offshore) at the AGM in October.

2022. Next year's focus will be to continue to get as many Sappers as possible out on the water both sail training and racing. We will be busy conducting Trojan's winter maintenance in the quiet season and we are looking for a good sale of Right Royal to help fund the purchase of a replacement yacht at some point during the 2022 season. From the 1st of April, the REYC will lose bosun support from the Corps and an alternative model which ensures availability and maintenance standards of the yachts is currently being finalised by the Vice Commodore.

This year has seen slightly lower expenditure on yacht maintenance as a whole. A paucity of specialist contractors (high demand caused by Covid) and an inexperienced bosun team put a certain amount of pressure on the Offshore committee to keep the boats up to the required standard, particularly making sure Trojan was ready for the Fastnet Race. Fortunately, the Fastnet crew took ownership of Trojan's maintenance a few months before the race which helped to ensure she was in good order when she set off in August.

Right Royal. Right Royal had a replacement sail-drive diaphragm and new sea-cocks. However, due to the shortages of contractors to conduct this work, she was not put in the water until Jun and therefore had a short charter season.

Trojan. Trojan's sail drive was replaced this year and she received a new racing main sail just in time for the Fastnet thanks to a successful Welfare Grant. Although her rudder was extensively repaired last year, this repair failed during the Fastnet Race and subsequently had to be re-engineered.

Photo 1 Trojan coming out at Hornet for repairs.

Fastnet Race. In terms of the successful Fastnet campaign this year, thanks must go to WO2 Jason West, who advertised the race widely across the Corps and organised meetings, training sessions and the qualifying events to maximise participation. This was no mean feat in a year of Covid restrictions whereby training on the boat could not start before May. Of an initial list of 55 hopefuls, the eventual lucky crew of seven completed the qualifying mileage and pre-race training without having to call upon the military exemption. The placing was 40/47 of those who finished in IRC3 (there were 72 starters in the class) and 158/181 finishers in IRC Overall (there were 269 IRC entries); a very respectable result in challenging conditions. To reward the squad for their hard work over the summer, WO2 West organised a dinner at the Royal Ocean Racing Club and he was awarded the Seamanship Trophy in recognition of his efforts. A separate report follows later in the Yearbook.

Army Offshore Regatta (AOR). Due to Covid, the Army Offshore Regatta (AOR) was delayed until September, with Maj Andy Motion skippering Trojan (and winning the IRC category) and Lt Col Charlie Battey (Acting Commodore) skippering one of the JSASTC Victorias winning the best novice skipper prize. Lt Col (Retd) Andrew Douglas also won the best cruiser on Rollercoaster. Although the Club did not win the much-coveted Dolphin Trophy, it was one of the only Clubs to have three boats competing a very good show.

RESTW. The annual RE Sail Training Week took place in July. A total of 42 Sappers took part on the two Club yachts (Right Royal and Trojan) and five of the JSASTC's yachts (a mix of Victoria 34s and Halberg Rassy 342s); Cleone again acted as a "Mother Ship" for the week, kindly provided by Col (Retd) James Anderson. The event was well organised by Capt Chris Barnard and Lt Alex Bidie and the STW format again succeeded in giving novice sailors a positive first experience of sailing with the Corps. Sgt Adam Hearn (RYA Cruising Instructor) was also able to qualify two Day Skippers and three Competent Crews by the end of the week. Lt Col Si Finch (outgoing Offshore Treasurer) coordinated the VIP-day, which had its best turn out to date: Maj Gen Sean Burley (Director Army Sports and Control Board), Tim Wood (OIC JSASTC), Brig Chas Story (Chief Engr ARRC) as well as the Commanding Officers of 33 and 35 Engr Regts and the Hon Sec of the RAYC. It is worth noting that the week was oversubscribed and had JSASTC been able to provide more yachts there would have been an even better attendance.

Charters. Charters of both boats only resumed when the third Covid lock down eased in spring 2021. Restricted access to the boats during the two 2020 lockdowns also limited the amount of maintenance work that could be done, which meant Right Royal was not ready for charter until Jun 21. The majority of Trojan's charters were for Fastnet training but Right Royal achieved almost the same number of 'person sailing days' overall, demonstrating once again that she is a popular hull for families to take out.

Programme for 2022. A provisional FoE is as follows:

Sale of Right Royal and purchase of new yacht. James Anderson is leading with the sale of Right Royal. She was taken out of the water in mid-November and at the time of writing is placed for sale on the hard opposite JSASTC. As was previously outlined in the REYC Hulls Paper 2020 Trojan will be retained and Right Royal exchanged for a robust cruising yacht; this plan is one year delayed as a result of Covid. A yacht purchasing committee has been set up to conduct the market research and purchase the yacht in time for the 2022 season.

South Georgia Exped. The JSASTC decision not to run Ex TRANSGLOBE 2021-23 has provided an opportunity for the Corps to launch an expedition to South Georgia in 2023-24. RE South Georgia will be a Corps owned expedition, organised as a joint entity between the RE Mountaineering and Exploration Club (REMEC) and the REYC and supported by the JSASTC using their high latitude capable Challenge 72 yacht Adventure. The concept of the expedition is to sail from the UK to South Georgia, via the Canaries, Rio de Janeiro and the Falkland Islands. The leg from the Falkland Islands to South Georgia will be particularly challenging and therefore ensuring that appropriate pre-deployment training is in place for the sailors and mountaineers will be the expedition's focus in 2022. The expedition plans to locate Adventure in South Georgia for 6 weeks, allowing the climbers to scale a number of South Georgia's many impressive peaks whilst also conducting scientific work in support of Bristol University's climate research centre. On completion, Adventure will return via the Falklands, and Rio, before handing the yacht back to the JSASTC in the Caribbean. To maximise participation from the Corps, the expedition will be broken into five "sailing" legs and we expect to open some of the legs to other Tri-Service sailors where qualifications are required. Two REYC project officers have been identified and Commander 8 Engineer Brigade (Brig Dave Bickers) has agreed to serve as the Exercise Director. Offshore are working closely with REMEC, 8 Brigade and the wider Corps to raise crews for the expedition and put a training programme in place.

Those departing offshore committee members deserve a big thank you for their tireless work and service to the committee; they leave it in rude health and well set for the future.

Summary. This has been a year in which in spite of ongoing COVID restrictions Offshore has managed to resume functionality and achieve some real successes on the water. The Fastnet Race and the RESTW are particular highlights of the year and their success was in no small way due to the efforts of the individuals who organised and participated in them. The committee has seen a few changes over the last year and will see some more in 2022 but is well prepared, with abundant enthusiasm. Never let it be said that change does not keep us on our toes!